A Society for the Study of Modern Visual Culture

I love Record of Lodoss War. Sometimes an anime comes into being as a perfect union of art with writing, which makes every moment shown onscreen more real than real life… 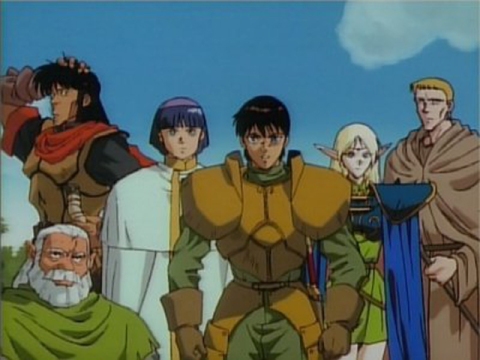 You might be aware of the excellent DM of the Rings, a webcomic that reimagined the epic storytelling of Tolkien as a rather poorly-run roleplaying game. What if there were an anime that was the reverse? Record of Lodoss War started as a Dungeons & Dragons campaign run by Mizuno Ryo in 1986 that involved several other major Japanese cultural figures, like sci-fi novelist Yamamoto Hiroshi. From 1988 until 1993, Mizuno adapted the notes from his campaign, which he had previously published online, into some of the first “high fantasy” novels written natively in Japanese. It was enormously popular and actually necessitated that Mizuno’s company, called Group SNE, create their own roleplaying system for other campaigns moving forward, not least to avoid legal issues with TSR, the cash-hungry owners of Dungeons & Dragons. This system, Sword World RPG, is now twenty-five years old and in its second edition, so the legacy and influence of Record of Lodoss War extends much further than just the 1990 anime adaptation about which I’m writing today.

The thing is, if you’ve ever played a pen-and-paper roleplaying game, you’ll know that they’re a lot of fun, but also that they’re very restrictive as a narrative format. In essence, you’re an author with no control over your protagonists, usually several in number, and most of the plot proper has to be laid out in between said protagonists all doing their own thing. Even a good campaign written and run by a talented game-master tends to have more than a few moments of incoherence or contradiction. Sometimes it’s a punch accidentally smashing in the face of a guard who was supposed to just be subdued for questioning. Sometimes it’s spending the better part of an hour breaking into a house, only to nail the door back onto its frame in order to defend the same house against the soldiers who come to investigate. Sometimes it’s abandoning the fight with the final boss to loot his hoard instead, because that fight appears to have been already won or lost. At its best, roleplaying is dramatic improv between two or more people who know their characters and the stakes better than any actor ever could. At its worst… well, you know the term “munchkin,” don’t you? 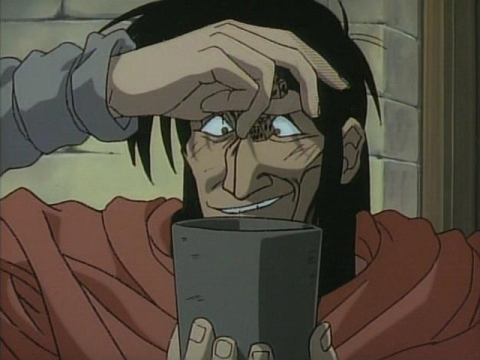 Woodchuck takes a chance in Record of Lodoss War

Record of Lodoss War isn’t the worst campaign from a roleplaying game I’ve seen, let’s make that clear. Still, it’s quite dysfunctional and sometimes even painful to watch. Rather than draw out my analysis in straight prose, I’ll collapse it down to bullet points.

There are some good things in Record of Lodoss War, of course. I don’t just love it as an exercise in camp, even though most of the character relationships are so stylized and exaggerated that it’s hard to stomach them otherwise. For example, Slayn and Glim, the magician and the dwarf, are both excellent, because they are down-to-earth and focused on goals that are clearly stated and achieved. I also like the barely-expressed motif that the campaign that became Record of Lodoss War is also the back-story and world-building for the next campaign, in addition to whatever entertainment value it offers to us now. You have characters like Emperor Beld, King Fahn, and Karla who fought together thirty years ago under similar circumstances to the current protagonists and became enemies only after parting ways. I don’t think that the sequels manage to turn that motif into a theme, certainly not in the mediocre Chronicles of the Heroic Knight that followed in 1998, but it’s still a good thought and I’ll give credit where credit’s due.

Slayn and Ghim follow some townspeople in Record of Lodoss War

What this anime has shown to me over the years is that perfection is not the only endpoint of a creative work. Record of Lodoss War is a mess, by any stretch of the imagination, but it also captures the feel of a roleplaying game, always approximating the monomyth but still transgressing upon it. If someone were to refine it into a more sensible and satisfying story, I doubt that feel would survive the process and its unique benefits, however hidden they might be behind pointless human drama, would be lost. Record of Lodoss War profits greatly from owning up to its influences, warts and all, which is something a bit too easy for me to overlook. When I conceive of Neon Genesis Evangelion as a work of perfect genius, which is my actual opinion but one that I try my best not to share here, I tend to forget that Sadamoto Yoshiyuki talked in an interview about how he and Anno Hideaki copied the characters of Ikari Gendo and Kozo Fuyutsuki wholesale from the 1970 British television series UFO, which they just happened to be watching at the time. I’m forgetting it even as I write it now!

We don’t always want art to have a process. It’s much more acceptable for it to have sprung fully-formed from the artist’s head like Athena. Works like Record of Lodoss War, which is saved as often as damned by its humble origins as a campaign for a roleplaying game, do well to make us question the desire behind that assumption.

§ One Response to Zeroes of Yore

This site uses Akismet to reduce spam. Learn how your comment data is processed.

You are currently reading Zeroes of Yore at The Crab-Flower Club.